Tower Health, also known as Hit Points (HP), is a feature that was added in v3.2 of Pokemon Tower Defense. However, despite being released that early, enemy Pokémon did not attack your towers until the level Lavender Town was released in v3.7.

HP acts as your Pokémon's life meter--if a tower's health drops to 0, the Pokémon faints and remains unusable for the duration of the level. HP is a stat that increases upon levelling up, just like Attack or Defense, and may be lowered and restored during a level through various methods. However, the Pokémon's maximum HP can never be exceeded at any time, and any damage taken during a level does not affect the max HP.

Currently, Blissey has the highest base health stat with a whopping digit 255.

In most levels, there are multiple ways for your towers' health to be lowered:

Most attacks intend to deal damage to the target; beginning with the Lavender Town level in Chapter 4, all non-training levels will include enemy Pokémon that use attacks, most of which harm your towers. Besides the regular attacks, a small group of moves can instantly drop a tower's health to zero ("One-Hit Knockout," abbreviated OHKO), although enemies with such moves are rare.

In addition to enemy attacks, certain attacks your party Pokémon use may also harm themselves. Some moves, such as Take Down and Flare Blitz, deal recoil damage that harms the user by a fraction of the damage caused to the target.

Earthquake damages the rest of your team as well as the enemies when one of your Pokémon uses it. Selfdestruct and Explosion function similarly, with the added effect of making the user faint.

The weather effects caused by the moves Hail and Sandstorm will damage all Pokémon on the field that are not of a specific type, including your own.

Potions are items introduced in v4.1 that can heal towers' HP. Aside from these items, some moves are designed to restore HP to your towers. There are three types of healing moves: 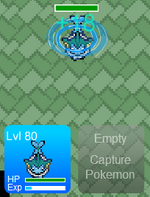 Moves that heal the user

Most healing moves heal solely the user and are incapable of being performed on a separate target. Recover, Rest, Synthesis, Aqua Ring, and similar moves all fall under this category.

A few attacks deal damage to enemies and restore a fraction of that damage to the user. These moves include Giga Drain, Leech Seed, Leech Life,Mega Drain, and Absorb.

Certain moves heal in unique ways that can affect targets other than the user; for instance, Healing Wish causes the user to faint but provides full HP restoration to the next tower that replaces it. Another example is Heal Pulse, which will heal every unit on screen--enemies included!

Retrieved from "https://pokemontowerdefense.fandom.com/wiki/Tower_Health?oldid=160884"
Community content is available under CC-BY-SA unless otherwise noted.